Determination of the elemental composition by means of EDX mapping

By means of EDX analysis, it is possible to determine an overview of the elemental composition of the materials. In addition, depending on the task at hand, we can carry out individual surface examinations, analyses of inclusions, impurities and much more.

Atlantic Copper x 150 BSE: A SEM image with a BSE detector at 150x magnification. BSE (Backscattered Electrons) detector allows to detect the electrons elastically scattered from the primary beam at the atomic nuclei. Since the heavy elements reflect the electrons better than the light elements, an image displayed by the BSE detector has better element contrast. Thus, heavy elements appear brighter on the image than light elements. 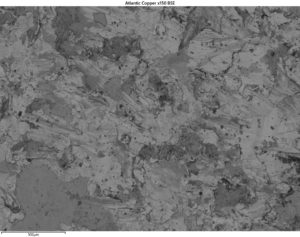 Atlantic Copper x 150 Topo: A topographic SEM image with BSE detector at 150x magnification. The BSE (Back Scattered Electrons) detector is divided into four quadrants. A special configuration of the individual quadrants makes it possible to display the topographical properties of the sample surface. Thus, higher lying areas on the image appear brighter than lower lying areas. 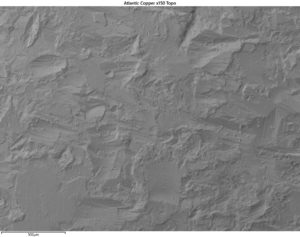 Atlantic Copper x 150 SE: A SEM image with SE detector at 150x magnification. SE (secondary electron) detector is used to detect the low-energy electrons produced by electron bombardment of the sample surface. The best resolution is achieved with the SE detector. 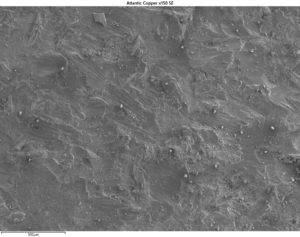 Sum spectrum: An EDX (energy dispersive X-ray spectroscopy) overview spectrum at 150x magnification. The surface is scanned with the electron beam. This beam excites the atoms in the sample, which then emit X-ray radiation of an energy specific to the respective element. Elements are clearly identified by this characteristic X-ray radiation and a 2D distribution image is created.

EDS layer image C: The distribution of carbon superimposed on the SEM image at 150x magnification. 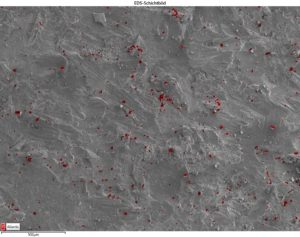 EDS layer image: The distribution of detected elements overlaid with the SEM image at 150x magnification. The base material contains mainly iron and manganese. Thus, distributions of these elements were not shown in favour of better visibility. 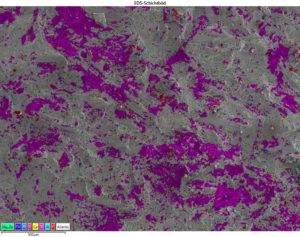